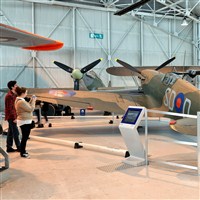 A great day out for all ages!

Britain's National Museum of Aviation celebrates the story of aviation from before the Wright Brothers to the RAF of the 21st century with one of the world's finest collections of legendary aircraft and associated exhibits. The Museum stands on the site of the former Aerodrome, RAF Hendon, one of the oldest aviation centres in the country. The Museum exists to preserve, conserve and exhibit the history of the Royal Air Force and its relationship with aviation. It aims to promote public understanding of the role and achievements of the Royal Air Force for the benefit of future generations. Entry to the Museum is free.

* Timings give an indication of the length of the day and are approximate.

It is not possible to display the map. This may be due to Google Maps not being supported in your browser.

Search The location was not found

There are currently no departures available on this tour.

The website timed out while searching for the departure dates. Please try again.